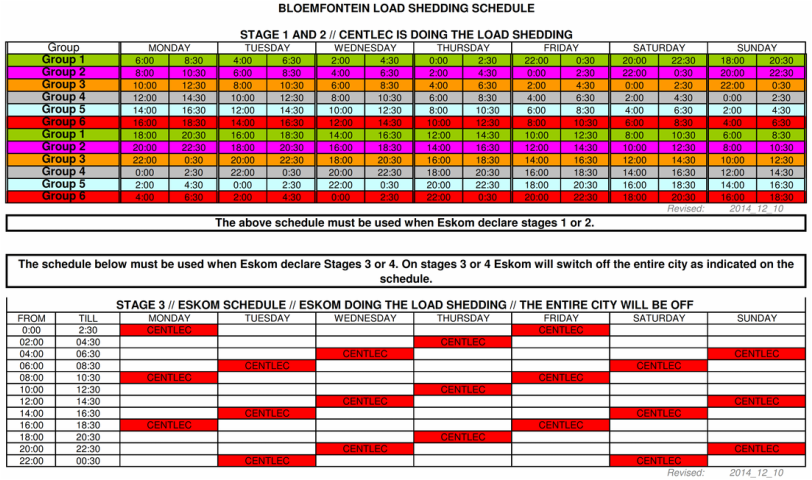 On the 6th of December 2015 Centlec was notified that a child was electrocuted in Heidedal Area.

The child was taken to hospital for observation and tests were performed on her. In terms of the test results the child is fine.

An electrician was immediately send out to attend and investigate the incident. It was discovered that a 2– way pillar box at the erf boundary between stand number 137 and 139 Dr Belcher Road was “LIVE”. The cause for this live meter box was due to theft of the earth wire that made the supply to back feed to the armouring of the cable and made the box “live”.

The box was then isolated to make it safe and the problem was fixed.

Centlec (SOC) Ltd would like to warn the community of Mangaung and surrounding areas to be vigilant of illegal connections and report unsafe wires as well as meter boxes that are damaged or illegally opened immediately in order to prevent any electrical shock that may occur as these actions might lead to deaths.

NB: We encourage members of the community to refrain from playing with electrical infrastructure such as meter boxes and steel poles and must immediately report any illegal connections, dangers posed or unsafe installations to Centlec response team at 051 409 224 or 0860076937.

CENTLEC would like to congratulate Wayde van Niekerk, the 23 year old athlete and a Marketing student at the University of the Free State. He was honoured as the top achiever of the 10th Annual SA Sports Awards on Sunday the 22 November 2015 in Mangaung Free State.

He is the fourth fastest man in history over 400m as he has won his first world championship title in August at the IAAF World Championships in Beijing 2015.

We would again like to congratulate Dr Chomane Chomane from Lesedi Fm on receiving the Steve Tshwete Lifetime Achievement Award.

I would like to congratulate both Dr Chomane Chomane and Wayde van Niekerk on attaining their prestigious awards on Sunday, Wayde is a true reflection of what hard work and determination symbolizes. Dr Chomane is also a hard worker who contributed immensely to sports. These two icons truly made the Free State province proud says CENTLEC CEO Mr NA MGOQI.

We wish them well upon their endeavours they intend to partake in the nearest future.

CONVERSION OF CONVENTIONAL METER TO PRE-PAID METER
​
CENTLEC hereby informs you of the above mentioned in terms of the National Rationalised Specification (NRS) 057 as well as Section 21 (Metering) of the Mangaung Metropolitan Municipality By-laws relating to Electricity Supply as promulgated by Local Government Notice No.110 of 28 October 2005, Centlec is currently converting the conventional meters to pre-paid.

The pre-paid meter installed is pre-loaded with 50 Units, which will be recovered with the first purchase. Please note that the CENTLEC personnel visiting and working at your premises will produce identification.